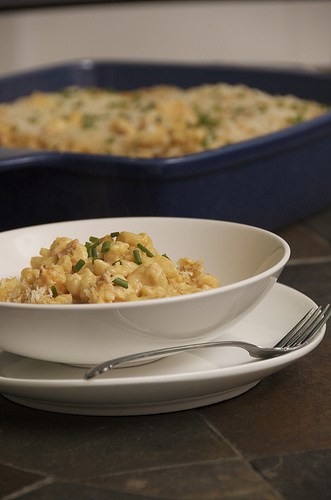 Lobster mac and cheese. I just love the thought of it, my two favorite things together. Despite the fact that cheese and seafood are tricky together, this recipe really works. I have wanted to make it since I saw it on Michael Smith’s Chef at Home series. Lobster is obviously expensive and this is a great way to stretch it. I probably used about ¾ pound of lobster meat in this. Although the recipe says it serves 6, I think this could easily serve 8-10 people. Even with only adding half the amount of cheese, this was incredibly rich. Next time I make this, and there will absolutely be a next time, I may serve this in individual little ramekins. 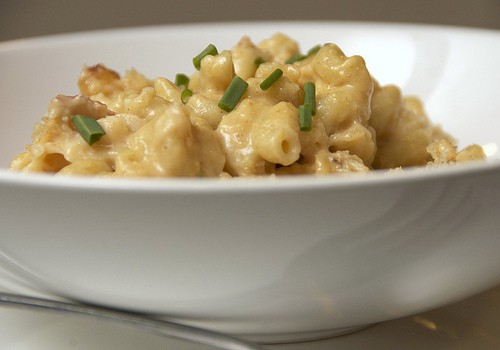 I made minimal adjustments that are noted below in parentheses.

Lobster Macaroni and Cheese
By Michael Smith, Chef at Home
Ingredients
1 box of penne pasta (I used elbows)
1 sticks of butter
2 x garlic cloves, chopped
1/2 cup of flour
1/2 cup of white wine (I didn’t have any and used ¼ dry sherry)
1 can of evaporated milk
4 cups of milk
1 tbsp of paprika
2 tbsp of Dijon mustard
1/4 tsp of cayenne pepper
8 oz of cheddar cheese, grated
8 oz of Monterrey jack cheese, grated (I omitted this)
Salt and pepper
2 x 1 lb. lobsters, cooked and shelled (I used about ¾ pound cooked lobster meat)
2 cups of breadcrumbs (I used 1 cup of panko)

Directions:
Preheat oven to 350 degrees F (175 degrees C). Drop the pasta into boiling, salted water and cook until almost tender, about 12 minutes. Make sure the water tastes like a day at the beach, as the pasta will absorb it and become properly seasoned. The pasta should not be fully cooked; it should have just a touch of firmness when tasted. Drain well.
Melt the butter in a saucepan over medium heat, add garlic and cook for several minutes until it softens. Add the flour and stir with a wooden spoon until a smooth paste forms. Continue cooking for a few more minutes, in effect toasting the mixture and adding flavour to it. Slowly stir in the wine and continue mixing until smooth and then add both milks, mixing well again. Continue whisking until the mixture coats the back of a spoon. Add paprika, Dijon, cayenne, salt, pepper and cheeses and stir until melted. Roughly chop lobster meat and add to the cheese mixture along with the pasta. Stir well to combine and season with salt and pepper. Pour into a 9-inch by 13-inch ovenproof casserole or similar dish. Sprinkle with breadcrumbs and bake until the mixture is heated through and the breadcrumbs are golden brown, about 30 minutes. (I topped it with chives before serving.) 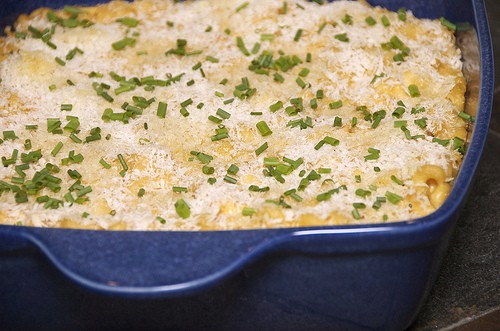