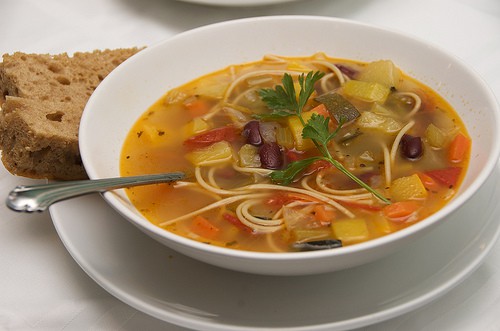 I wish I could say this soup was the product of my garden. Alas, it was not. I still have two tiny green tomatoes on my one plant. However, the likelihood of them ripening before frost is not good. Most of the vegetables used come from J’s uncle’s overflowing garden. He gave us: tomatoes, zucchini, herbs, eggplant, and a ton of jalapeno peppers. I have other plans for the eggplant and peppers. The broth for this soup is on the lighter side as I am not really a fan of heavy tomato based vegetable soups. When I reheated this for dinner the night after it was made, I added four cheese ravioli even though there was already spaghetti in the soup. The cheese in the ravioli added a nice richness to this, and of course everything is better with cheese.

1 cup chopped onion
1 cup chopped carrots
1 cup chopped celery
2 cloves chopped garlic
1 quart chicken stock, plus 2 cups water
1 bay leaf
1 sprig of thyme
¼ tsp fresh oregano
A pinch of finely chopped rosemary
1 medium zucchini
1 medium summer squash
1 cup chopped tomatoes
½ cup spaghetti ( I used a whole grain blend)
1 cup canned kidney beans
1 tsp chopped parsley
Salt and pepper
Olive oil
Sautee the onions, carrots and celery in 2 tablespoons of olive oil. Add the garlic and cook for another minute then add the chicken stock and water. Add the herbs, be certain to only add a small amount of rosemary as it can overpower the soup. Bring to a boil and allow to simmer for at least half an hour.

In a separate sautee pan, add just enough olive oil to coat the bottom of the pan. Over medium heat add the zucchini and squash. Allow them to brown slightly and add the tomatoes. These will likely have a lot of liquid that can be cooked off by raising the heat slightly. These can now be added to the stock.
Break a ¼ of a pound of spaghetti into four sections. Bring the soup to a boil and add. When the pasta is al dente add the beans and stir in the fresh parsley. Remove the bay leaf and the spring of thyme before serving.