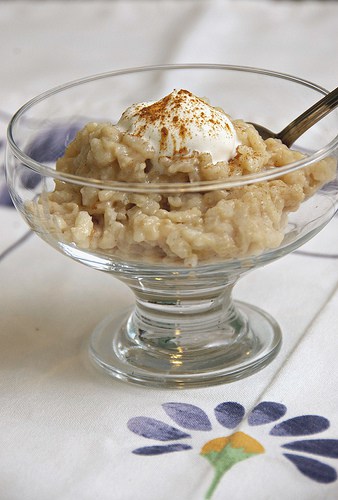 I love complicated desserts that require using a mountain of dishes and stretching my culinary ability. This is not one of those desserts. In fact, this is pretty much as simple as dessert can get, but it’s really, really good. Arborio rice gives this a really nice texture, and the end result is creamy and custardy. If I had a vanilla bean, I would have simmered it with the milk, but I had to settle for vanilla bean paste. I topped this with some whipped cream and cinnamon, but it really doesn’t need any adornments.  This is a perfect weeknight dessert or a light dinner.

Bring water to a simmer and add the rice, stir occasionally until the rice is almost entirely cooked and add the milk.  Add the sugar, cinnamon, vanilla, and pinch of salt.  Return to a simmer. In a small dish, beat the egg and add a 1/4 cup hot milk to it a tablespoon at at time.  Stir the egg mixture into the pudding and cook on a low simmer until it coats the back of a spoon (about two minutes).  Cover with plastic wrap to avoid the pudding forming a skin or serve warm.